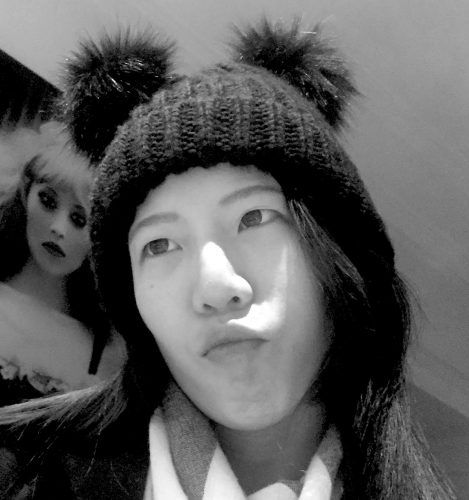 Questioning ideas of modernity and independence, Tomomi Mishima’ s work represents Japanese woman’s new lifestyle. Good looking young girls dressed in fashionable clothes are an unique illustration of a virtual role model. Considering increasing influence of the western culture and media, her characters reflects evident changes in Japanese society. In the attempt to draw attention to young generations which have been captured between their traditional upbringing and tempting propaganda, Mishima emphasizes the importance of being trendy in the contemporary world. Speaking the universal language of painting, she talks to everyone,regardless of their ages or nationality.
Universality of the Visual LanguageRecognizable for interesting background constructed from garishly colored pills, Mishima’s paintings lure the attention of the viewer with their combination of vivid colors and divided surfaces. Red and blue behind creates the contrast with representations of the female subjects with simple hairstyles, dressed in white shirts. Pretty faces pop up from different sides and their short skirts are usually in famous Burberry check pattern which is one of the most widely copied trademarks in fashion. The inscriptions on Japanese, French or English indicates the

universality of visual language, transferring the message of always going issues, as love and peace.  Member of the New Generation Tomomi Mishima processed the themes of female emancipation in Japanese society through the lens of contemporary lifestyle and fashion tendencies. Influenced by young girls, her paintings represent the unusual illustration of the virtual idol. Enchanted with everything that comes from the West, these girls except the life between what they are and what they want to be. Being herself a member of the new generation of Japanese artist, Mishima is an active part of Crazy Noodles, Tokyo organization which promotes creative activities of young Japanese artists who integrate pop culture into their artwork.